This walk goes from the Miners Cottage to the Museum, visiting prominant mine shafts, ore staking floors, and mine building ruins. The walk is approximately 1 hour and can be walked in either direction. Please keep to the defined trail marked by signs and arrows.

Miners Cottage:  The Cottage is typical of the type built by the Cornish miners and as family members increased, more rooms were added, hence the hip and valley roofline. The cottage is furnished as a miners home about the 1900’s period and has been lived in by brick makers and miners.

Look at the information board at the start of the trail.

Hancocks Tailing (Skimp) Heap – This contains the waste crushings of the ore after concentration by crushing and jigging. The concentrated ore was sent to Wallaroo Smelters. There were 5 large tailings heaps on the Moonta Mine Containing approximately 60 000 tonnes. There was still some copper in these crushing’s and in 1900 the cementation process was introduced to leach out the copper and precipitate it.

The terracing of the heaps and pumping of seawater over them is part of the copper recovery process which is fully explained in the Cementation Works. Take a ride in the National Trust Tourist Train into this area for further explanation.

Prince Alfred Shaft – Situated at the south end of Fergusons Lode is 720 feet deep. The shaft was worked by a cable from Bowen Winding Engine. In 1872 a magnificent specimen of yellow ore weighing upward of a tonne was found. The mouth of the shaft had to be cut away to enable the specimen to pass through it. It was intended for the Exhibition in Europe.

Ferguson Shaft  – at 1224 feet deep is the deepest in this segment and was wound from Bowed Engine House. The base of the overhead shear legs can be found and likewise in a row towards Bowen engine house, the cement bases for the poles holding the overhead winding cable. In 1872-1876 period Ferguson’s and Prince Alfred Shafts were the richest section of the mine.

Fergusons Ore Floors in 1873 there were monster amounts of ore including native copper and grey ore of a high percentage of copper. Some lumps of malleable copper weighing nearly 123 kilos.

Note the various gauges of rail beds across the floor. The 2 foot gauge was used to convey the ore to the crushing plant at Hancock Engine House. The 5 feet 3 inch horse drawn wagon system (rail bed approx 10 feet wide) took the concentrated ore from the crusher to the Yelta siding nd then to the Wallaroo smelters. This 5 feet 3 inch gauge was reduce to 3 feet 6 inch in 1891 when locomotives took over the haulage from Moonta Mines to the Wallaroo Smelters.

Greens Shft  1230 feet eep. Hancocks Engine worked the pump in this shaft which drained the load and also deddowes lode via a 500 ft diamond drill hoel at the 1200feet level.

Hancocks Engine House  there are 3 Cornish boilers here on the east side of the engine house and on the western side were the crusher and jigger house. From this elevated position note how the rail beds lead across the shaft to the shaft for hauling the ore up into the crusher. The cutting for drainage is near the jigger house site and was the site of a fatal incident when being supervised by Captain Faull.

A separate trail leads southward to Beddows Shaft 1560 feet and associated engine house and ore floors. Very rich ore was also taken from this shaft. The boilers in this engine house exploded on three occasions. 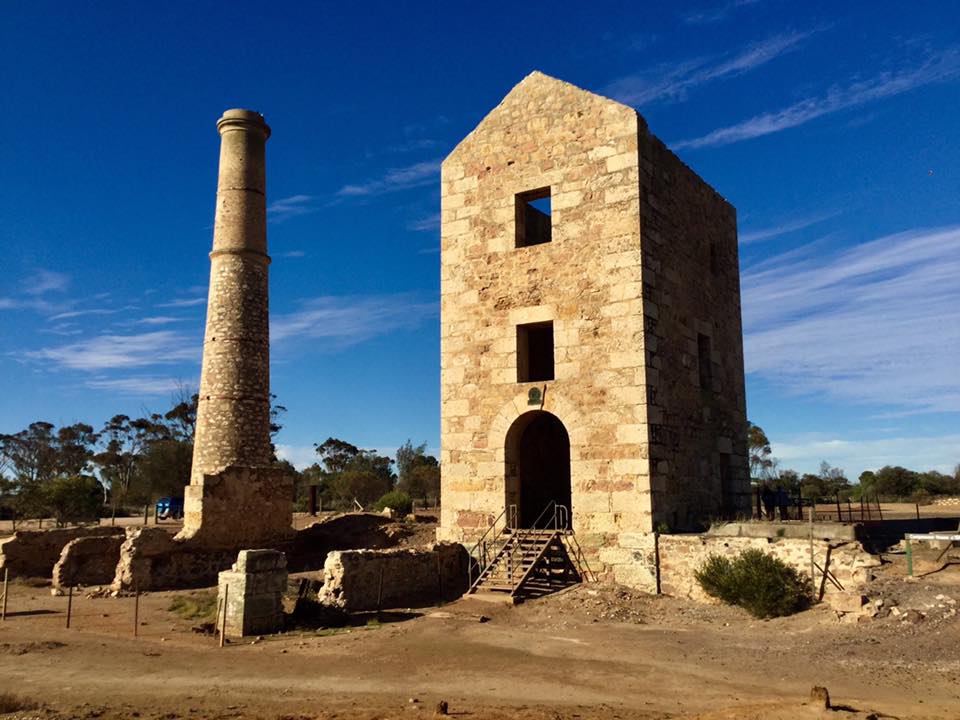 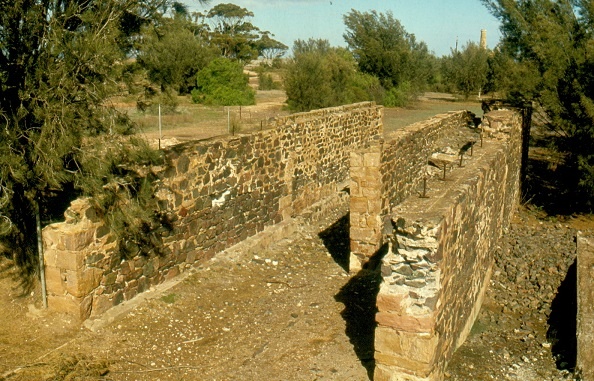